With a lot of film festival reviews, here's a round up of all the new articles this week on The DreamCage and AlbieMedia websites...

Susan Omand puts an apron on over her browncoat and tackles Firefly: The Big Damn Cookbook by Chelsea Monroe-Cassel, published by Titan Books...

"My Dearest Sister is the story of filmmaker, Kyoko Tsukamoto’s attempts to reconnect with her sister, a potter living in Fukushima."

Steve Taylor-Bryant is proved right (again) as he listens to the first single from Gozer Goodspeed's upcoming album, Running with the Outliers...

Daniel White pays tribute to the late Terrance Dicks as he leafs back through the Doctor Who Target Books collection...

"After that things get weird."

Steve Taylor-Bryant discovered a much darker side to European film as he watched Dark, Almost Night, on recently at Raindance Film Festival... 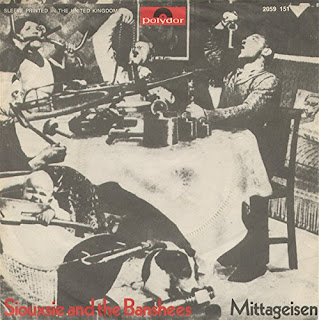 "the ugly story of President Duterte’s campaign against drug dealers and addicts in the Philippines."

Ren Zelen makes a start on a busy London Film Festival and feels the chill of Ghost Town Anthology...

"1979 was the peak of disco in its current form but commercial success was being enjoyed by many bands in other genres."

Jimmy Hunter's #SotD79 this week is by Siouxsie and the Banshees...

"I’d honestly forgotten Wake Me When it’s Over existed."

Thirty years after its release, Steve Taylor-Bryant looks back at the Faster Pussycat album...

With a couple of days to go on his latest Death Sentence: Liberty kickstarter, comics creator supremo Monty Nero tells us about the big idea behind writing the Death Sentence series...

"Ai Weiwei: Yours Truly is a documentary about not just Ai Weiwei, although it is centred on him. It is a film about activism and activists more generally and it is also about the role of art as a political tool."

With a bodycount of less than 81, a cheese count of at least 11, and a very surprising fact about the sequel, this week's Was This Always Weird podcast looks back at the 1985 film Commando...

"interweaves life in an elite girls’ boarding school in contemporary Paris with history, folklore and the religion of voodoo in the Haiti of 1962."