With Monty Nero's latest crowdfunder for issue #3 kicking off at 10am this morning, Steve Taylor-Bryant gets caught up by reading the second issue of Death Sentence: Liberty...

With Alien getting re-mastered for a 4k return to cinemas and home re-release, Ren Zelen looks back at the sci-fi horror milestone in its 40th Anniversary year...

Out in paperback tomorrow, a reminder of Tony Cross' thoughts on Death in Ten Minutes: Kitty Marion: Activist, Arsonist, Suffragette by Fern Riddell...

Dylan and the Dead is one of “those” albums that any patchouli-scented-psychedelic-hippy-student-protester-wannabe worth their tie-dyes bought when it got released 30 years ago, just to say they had it rather than because it was a great album. 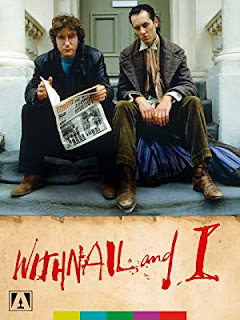 Ian Ham went to Cheltenham Playhouse last night to watch Withnail and I. He wrote this pre-review before he went (although he assured us it's not because he wouldn't be capable of writing it afterwards)...

With the film out on DVD, Blu-ray and 4k on Monday, a reminder of David Ames' thoughts from last year on David Gordon Green’s 2018 incarnation of Halloween...

Inspired by our series of articles looking back at music released 30 years ago, Jimmy Hunter takes a step further back in time to give us a Song of the Day 1979. This week, he'd much rather be the Reverend Bluejeans...

The 2019 BRIT Award winners have been announced. How did Susan Omand do with her predictions?..

Kraig Taylor-Bryant reflects on the original series of Black Mirror, with a look at the episode Fifteen Million Merits...

Our Doctor Who expert, Tony Cross, is journeying through all of time and space to bring us his thoughts on every available Doctor Episode. Today we have two articles...