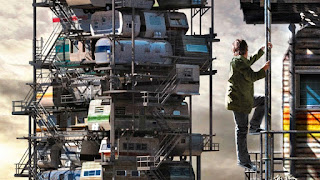 Do you remember 2015? We as a site took the challenge to review every Bond film, and some other Bond related stuff as well, before the release of Spectre. It was quite the task but got us thinking... How can we top that? Well we've got an idea....

Ready Player One by Ernest Cline is a favourite amongst a few of us here (read the reviews here if you don't believe us! Steve's, Nate's, Jayson's, David's) and we often chat about the sheer amount of pop culture contained within its pages. There are some corking games, arcade machines and consoles mentioned heavily. Books and authors are copious. Television is memorable. However when it comes to film there are loads and loads. In fact, just so you can see how many, the entire list is at the bottom of this page. Ready Player One is itself going to be a film and comes out in March 2018. So here's our idea, our project, nay our calling! We are going to review all of the films mentioned in the book, before the release of Ready Player One the movie (which, it seems has gone against Nate's casting choices).

Yes, every single titled film below will get an article of its own - and the ones we've done so far are in red with links to the articles.

Ewoks: The Battle for Endor

Caravan of Courage: An Ewok Adventure

Back to the Future

Raiders of the Lost Ark

Indiana Jones and the Temple of Doom

Indiana Jones and the Last Crusade

Some Kind of Wonderful

Monty Python and the Holy Grail

Revenge of the Nerds

Howard: A New Breed of Hero

The Lord of the Rings: The Two Towers

The Lord of the Rings: The Return of the King

The Silence of the Lambs

The Adventures of Buckaroo Banzai Across the 8th Dimension

The Wizard of Oz