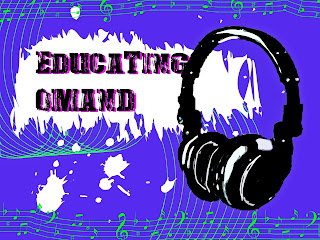 Due to her, somewhat lack, of musical education, this year Steve Taylor-Bryant has set Susan Omand a review challenge on AlbieMedia ...

Catch up with the reviews as they are published on AlbieMedia

Our immortal Scottish, Bach listening, Van Gogh loving, Earl Grey swilling, Queen of popular culture has a gap in her musical upbringing. She stopped listening to new music around 1990 (not 1890 as first thought) deciding for herself (how dare she) that nothing would ever top the Bay City Rollers, or something, to be honest I’d stopped listening to her around 1990 as well. So I decided that something must be done about this. She’s right in a way, a lot of music released in the 1990’s and early 2000’s was utter tosh, but like every generation there was some elements of musical genius released that Susan just hasn’t even heard of. To help me in my evil intent/ability to educate I needed a man steeped in that generation of music, a man that knows his Nu Metal from his Skater Punk, a man who doesn’t care what people say about him, a giant of the twisted idea. Yes, I turned to Madius Comics nutcase in Chief Mr Robin Jones for help. This man has listened to every song and album ever released and his Spotify playlists are nearly as long as his FBI charge sheet but together we’ve settled on 18 albums that we think Susan should immerse herself in for her own personal betterment, obviously not our own personal fun. Susan will try as many as she can, I’m sure you will hear her subtle Scottish accent screaming something you can’t understand but translates as “I don’t like this, what is it? Can I deep fry something?” And we will sit back and laugh/grade her exams.

The 18 19 we have chosen for our Educating Omand series are...

System of a Down – Toxicity

Slipknot – Welcome to our Neighbourhood

The Offspring – Ixnay on the Hombre


You can stalk the Music Man of Madius Comics here...